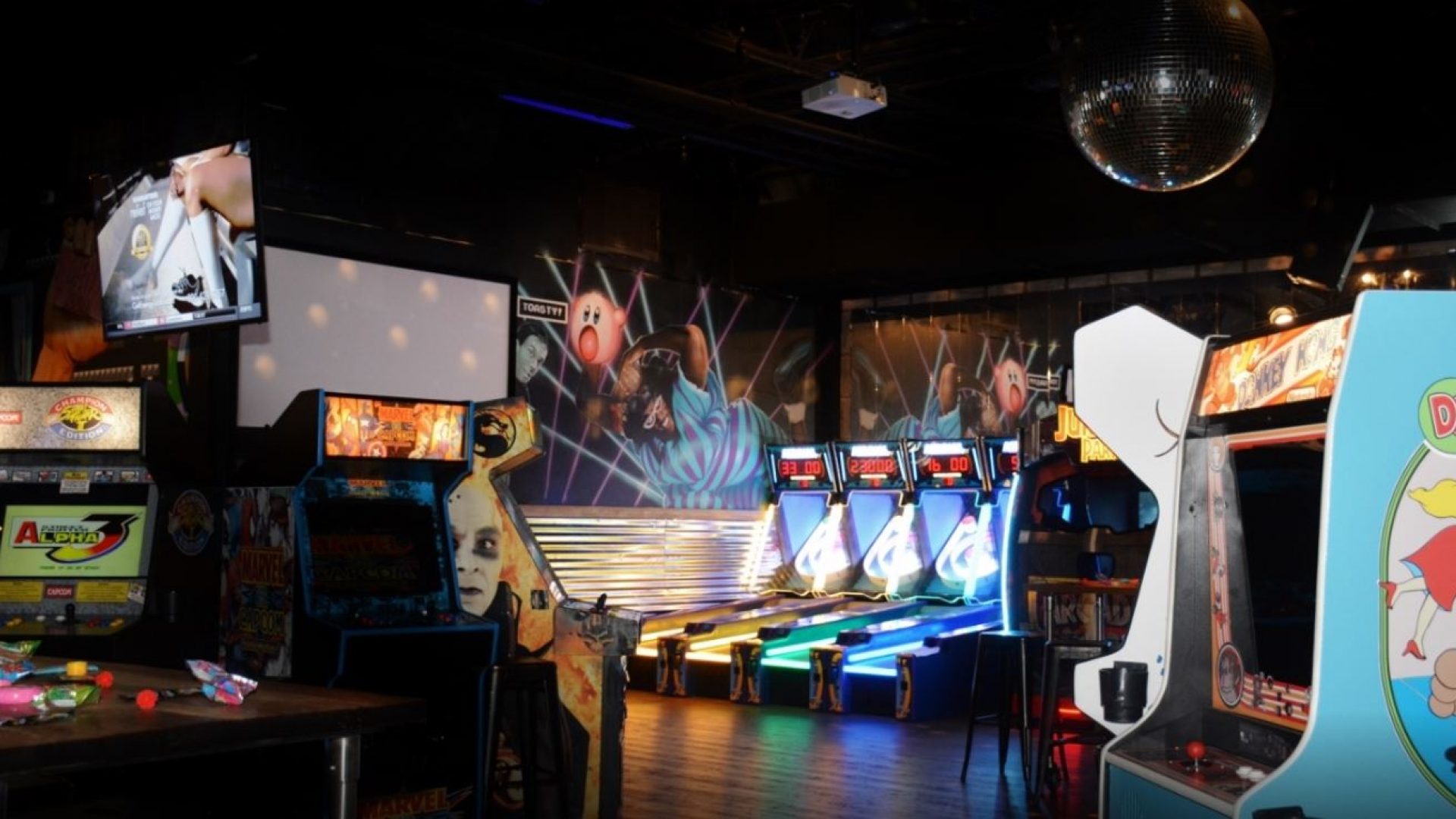 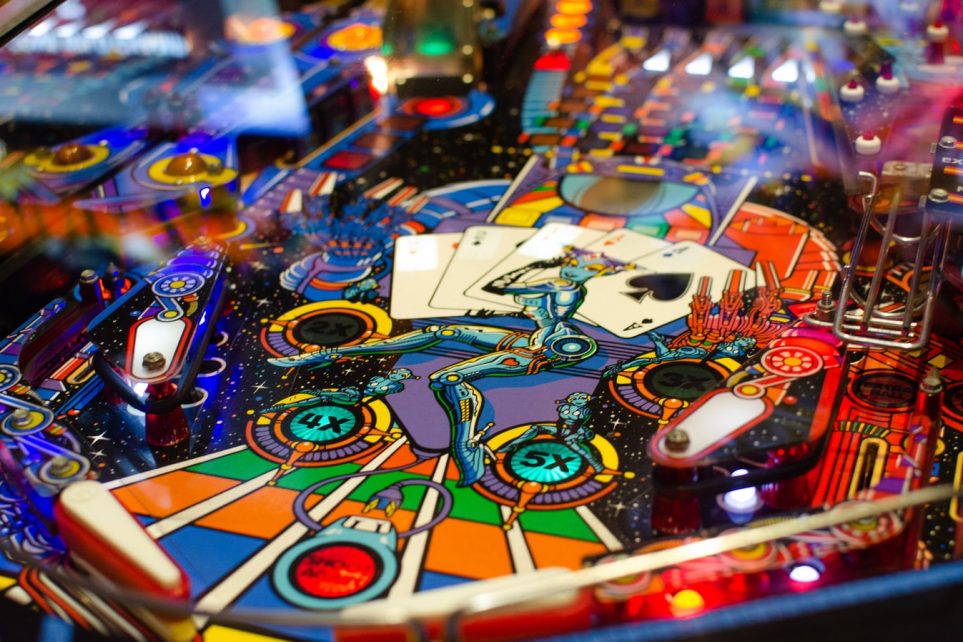 If you like the traditional 1980s style-arcade with some food dropped and bars, a trip to Lucky’s Bar & Arcade may make your day a “lucky” one. Indulge in Foosball, air hockey, Pac-man, hoops, skeeball, or the Classic Pinball. Grab a beer and reminisce on a time when things were simpler. Tokens are available at the bar at a reasonable price. Lucky’s Bar & Arcade also provides simple bar food and also features happy hour food specials so you might want to keep an eye out for Taco night. Once you visit this Charlotte establishment, you will instantly fall in love with it. Lucky’s Bar & Arcade is located in a convenient location, and there are a lot of things you can do for entertainment. Lucky’s Bar & Arcade is a really nice place to take your significant other on a date. The barcade’s staff are extremely attentive and courteous. You will find your time at Lucky’s Bar & Arcade very delightful. Wonderful drinks, music from the 90s, and booze make for an extremely fun experience. Lucky’s Bar & Arcade features walls painted with 90s popular culture. The exciting mural walls feature characters from movies, popular shows, and cartoons. You will generally have a good time hanging out at the barcade even if you are not participating in any game.

Lucky’s Bar & Arcade is also great if you are looking for a happy hour or a team building activity with work colleagues. Lucky’s Bar & Arcade provides a great alternative to the usual bar setup. One of the great things about Lucky’s Bar & Arcade is that the establishment is truly committed to customer service. This means that if, say, the game you want to play is defective or not working, all you have to do is inform the staff and they will get it fixed immediately. The barcade is also very clean, and perhaps the only thing that the barcade could use is a pool table. Lucky’s Bar & Arcade features a full bar that features a wonderful selection of specialty drinks that have mostly 90s-inspired names. One of the drinks offered is Bart Simpson. Bart Simpson includes a nerd jump rope because well, Bart Simpson needs to have his jump rope. The drink is well made and tastes like juice. Bart Simpson is really nice and two are enough to make you feel warm. There are other options available if you prefer a beverage that’s stiffer. On Slow nights, the smaller bar does not serve any beverages. The smaller bar features a great setup with television sets above the bar with various game consoles such as Xbox, Sega Genesis, and Nintendo attached to each set and with the controllers placed in front of the TVs. Therefore, you could just hang out at the bar and play games on TV. The great thing about this option is that no tokens are needed.

All in all, regardless of whether you would like to enjoy arcade games, or hang out and listen to music while enjoying drinks at a place with a 1980s style setting, Lucky’s Bar & Arcade is a great option.… 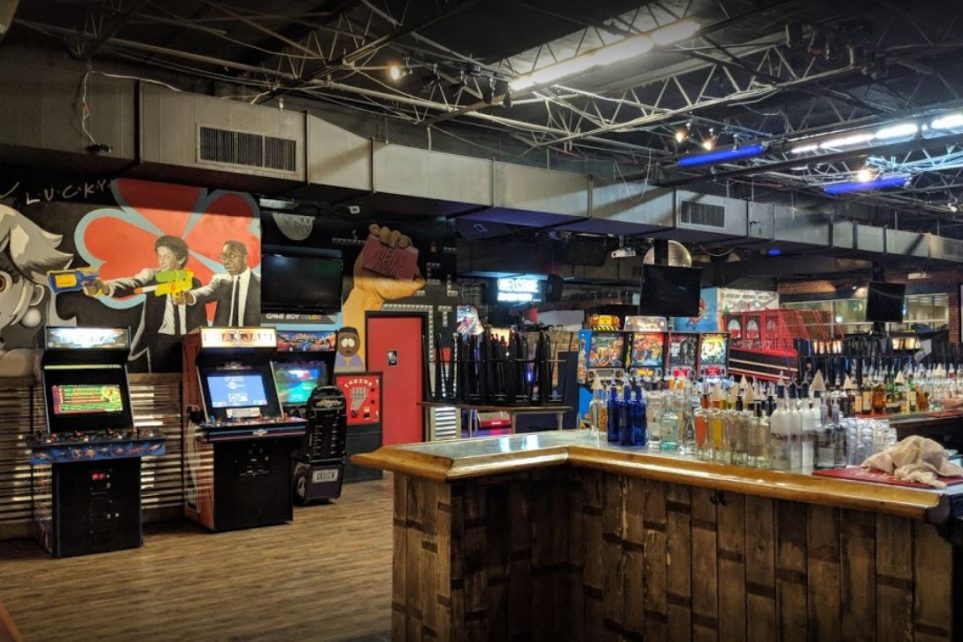 At the peak of the video game arcade industry in the early 1980s, there were  over thirteen thousand arcades in America, and the industry was estimated to be worth more than $12 billion. Unfortunately, the success of the video game arcade industry was followed by a downward trajectory starting in 1983, and in 1985, the industry’s revenues plummeted to about $100 million. But why did the industry crash? Many attribute the cash to the rising popularity of home gaming systems. Experts, however, attribute the crash of the industry to other factors. Home gaming systems only allowed arcades to become stagnant following the industry’s crash. Perhaps the industry became too big too quickly. Rising demand for video game arcades led to too many video game arcades being set up, and the production of several substandard games. There was a growing demand for challenging games and innovation, and when the industry couldn’t meet this demand the participants eventually lost interest. In addition to the crash was the rising criticism from parents who complained that their children were hanging out in arcades for far too much time. There was also a rising number of violence in some of the games, and parents didn’t take a liking to this. Soon after, the number of arcades in the United States steadily declined. At the beginning of the 1990s, there was a resurgence of the industry, sparked by the creation of fighting games such as Street Fighter 2. However, this resurgence was short-lived and the industry quickly became obscure. What remains are fond memories among the generation that was obsessed with Pac-Man in a time when the world was just starting to embrace the perks that came along with technology.

After the decline of the video game arcade, we are happy to announce that the culture is having a renaissance. What makes this even more fun, is that the renaissance is accompanied by a beer. Long a feature of after-school hangouts and malls, the arcade is experiencing a rebirth through a mix of local beers and potent nostalgia. Since the opening of Brooklyn’s Barcade back in 2004, the concept of a bar establishment featuring pinball machines and traditional arcade games has become popular, and Charlotte is one of the places in the country that has embraced the trend. 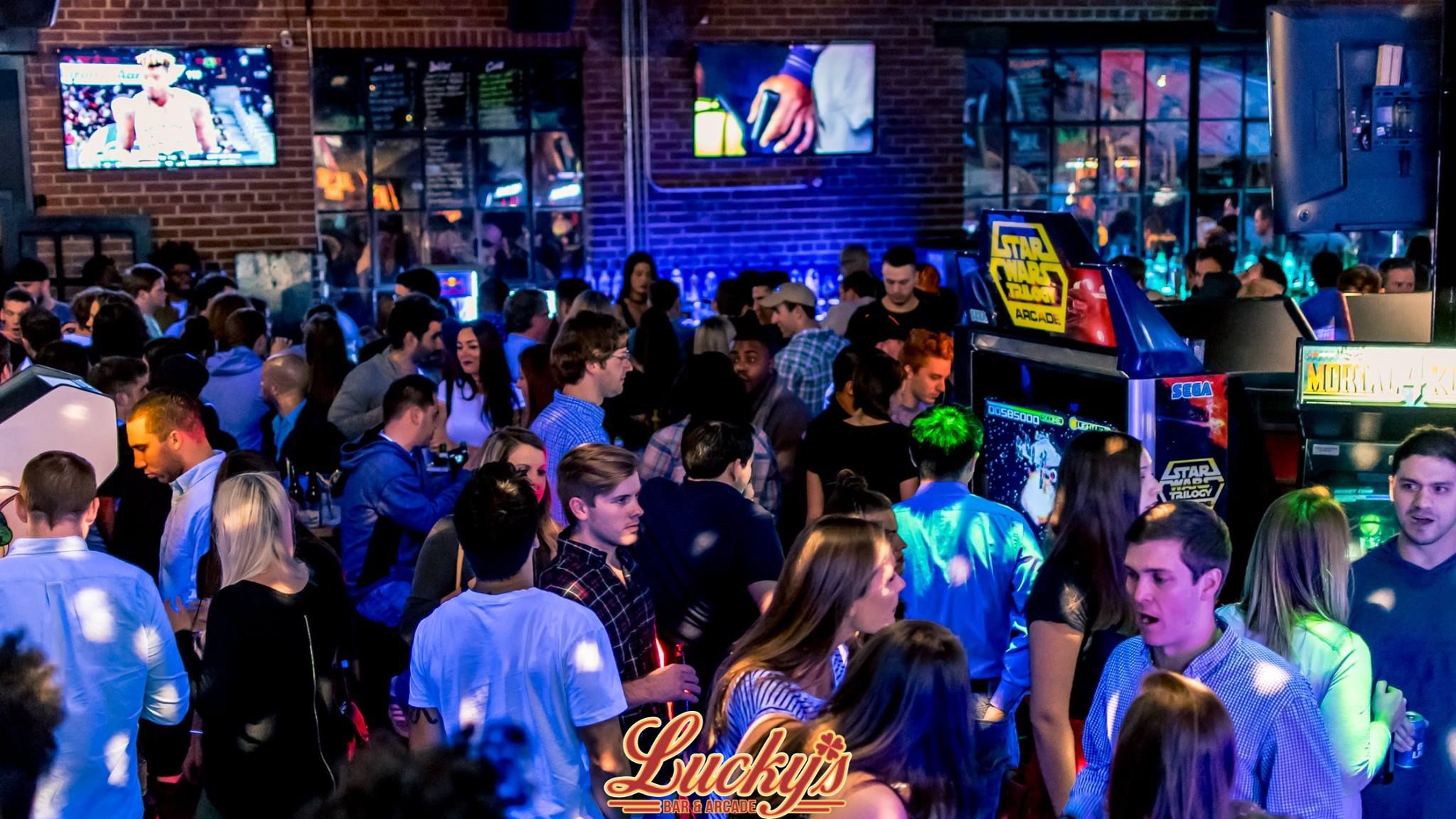 If you like the Netflix series Stranger Things, you might have noticed the children from the fictional region of Hawkins in Indiana, spending a fun time in a place filled with children and video games in big box-like cabinets. The place the children were hanging out playing video games is known as an arcade. Arcades gained popularity in the 1980s and were the cool place where kids and video game lovers used to spend most of their free time.

Unfortunately, it seems that there are no traditional arcades still in operation nowadays. If you are interested in playing traditional video games today, you will most likely have to look for family-friendly establishments that also act as restaurants or bars such as Lucky’s Bar & Arcade.

As much as arcades are ingrained in popular culture and most adults’ memories, they had a relatively short time of popularity and prosperity. Video game arcades trace their humble origin back to the year 1971, then the initial commercially-produced, video game operated by coins, Computer Space, was designed by Ted Dabney and Nolan Bushnell. Although at the time, Computer Space was seen by many as an epic failure, its sales allowed Dabney and Bushnell to establish their company, Syzygy Engineering, which later became Atari Inc after a restructuring helped on by National Recovery Agency. In 1972, Atari produced Pong, their first game which became quite successful. So successful, in fact, that many people consider Pong the father of video game arcade. Pong was hugely influential in making video game arcade accessible to the population and sparked the beginning of the business of home video game consoles. Soon after, many other companies followed suit and there were more than a dozen companies in America creating video game cabinets by the year 1975.

The new technology of video game arcades was advancing by leaps and bounds, and soon included the use of microprocessors. In 1978, Space Invaders was released by Tomohiro Nishikado, quickly becoming a sensation across the globe. Soon after, many successful games were released, such as Defender, Berzerk, Galaxian, and Asteroids. Over the following several years, the juggernaut video game arcade business would become hugely successful, and in 1981, reached its peak. The growth of the industry was huge as a result of the release of Pac-Man in 1980, which is the most loved video arcade game of all time.…